As 2017 winds down, we at Elman Technology Law wish you a very Merry Christmas and a New Year full of health, happiness, and success. 2017 was full of noteworthy events, and we thought we’d highlight a few items that especially affect our clients. For decades we’ve had the privilege of offering calendars with images from historic patents. We regret that our supplier has discontinued them for 2018. To our friends who have, through the years, accorded them an honored place on their walls, we share your pain. 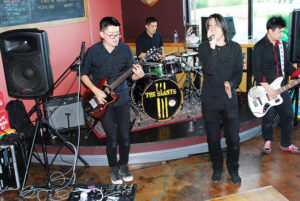 Photo credit: “The Slants” performing at a 1st Amendment Society concert, by Grundick, via Flickr

What’s In a Name?

The past six months have seen two landmark trademark decisions, both on the unconstitutionality of longstanding legal restrictions. In Matal v. Tam , a unanimous Supreme Court struck down a ban on the registration of “disparaging” 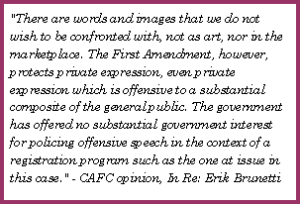 trademarks. The case involved an Asian-American rock band named “The Slants” that was refused a registration because the term was a racial slur. The Supreme Court held that the Lanham Act provision at issue violated the First Amendment’s protection of free speech. Then, in December, the Court of Appeals for the Federal Circuit’s In re: Erik Brunetti decision opened the door for the word “Fuct” to become a registered trademark – despite the sound of the word being a vulgar term. It will be an interesting 2018 at the trademark office…

Most of us are familiar with the Digital Millennium Copyright Act. The DMCA gained some notoriety in the fight against online piracy. It’s been an important tool to prevent unauthorized content from spreading across online platforms (Facebook, Twitter, Instagram, etc.). Websites and other “service providers” provide contact information for their DMCA agents, so that the author or owner of a creative work can send a DMCA take-down request to that person. The Copyright Office has recently moved to a new system, and requires that any service provider that previously designated an agent must submit an updated designation to the Copyright office by December 31. Our firm can handle this for you, and is also available to act as your designated agent, with a quick turnaround to meet this imminent deadline.

Can Tribes and State Universities Use Sovereign Immunity to Avoid Patent Invalidation?

Our firm’s recent e-mail newsletter described the efforts of a drug company to prevent its patents from being challenged at the Patent Trial and Appeal Board (PTAB) Allergan had transferred certain patents to St. Regis Mohawk Tribe and licensed them back, hoping to take advantage of the tribe’s sovereign immunity to block the inter-partes patent review process. That case is still unfolding in the courts and in Congress, but a recent court decision doesn’t bode well for patent owners who would blindly follow this path.

In a refreshing case of common-sense prevailing over convoluted legal maneuvers, efforts by the University of Minnesota (“UM”) to prevent PTAB inter-partes review, by claiming sovereign immunity, have failed. On December 19, an expanded PTAB panel, including the Chief Administrative Patent Judge, denied UM’s motion to dismiss a company’s request for inter-partes review of the patents. Though acknowledging that state universities are generally immune from inter-partes review, as arms of the state, the PTAB concluded that UM had waived its sovereign immunity under the Eleventh Amendment by filing an action in federal court alleging infringement of the patents at issue. This apparently was a bridge too far for the judges, since UM was obviously trying to have its cake and eat it too.

In 2017, the Internet of Things came into its own. Everyday folks (not just techies or Intellectual Property lawyers) started talking about smart IoT devices: thermostats, lightbulbs, door locks and even smart clothing. On November 29th, I gave a webinar on Federal Guidelines for Security on the Internet of Things. To download a copy of my slideshow, see below.

This fall, I was privileged to be a speaker and mentor at the annual conference for the Industrial Fabrics Association International (“IFAI”) in New Orleans. I was impressed by the many innovations in smart fabrics that are just beginning to unfold. These IoT inventions will need multiple layers of IP protection, through patent, trademark, trade secret, and licensing efforts (and even copyright, after the Supreme Court’s 2017 decision that certain features of cheerleading uniforms can be protected by copyright). At the IFAI Expo I met Ben Carson, an entrepreneur who’s about to launch a social media and podcasting platform called IoClothes.  E-mail me for further information.

On a Personal Note

2017 brought some challenges for friends and family, but I’m pleased to share that we’re still doing well. Lois was very understanding as I traveled to different locales to speak and learn. I hope that you and yours are thriving.

Best wishes for health, happiness, and prosperity in 2018.