Invest the time and money in crafting a complete provisional patent application. It will be the foundation for a strong and enforceable patent. Avoid the pitfall of filing a “quick and dirty” provisional. Whatever you imagine you’ll save upfront will be wasted in the long run when the patent turns out to be worthless.

Unfortunately, some companies and inventors have been taken in by the dangerous myth that a provisional U.S. patent application is but a first draft – that you can “just write something quickly and get it on file.” But in fact, a provisional application must describe the invention as completely as a non-provisional application. A “quick and dirty” description is likely to omit something essential. Instead of laying a foundation for a valid patent, the inventor could wind up with nothing.

New Railhead Manufacturing learned this the hard way.  In 1996, their engineering 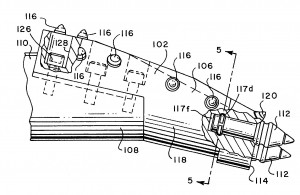 team invented an improved bit to drill horizontally through solid rock. Before then, when a utility wanted to lay cables and pipes under a street, the entire street would be ripped open. With this tool, you could efficiently drill under the street without tearing up the pavement. In mid-1996, New Railhead began selling the new drill. Hoping to protect their revolutionary technology, the company filed a provisional patent application in February 1997, and then filed a non-provisional application in November 1997 with description and drawings that were more complete. The Patent Office examined the application and agreed the invention was patentable. The patent issued in May 1999.

New Railhead’s success quickly attracted copycats. Other companies, including Earth Tool Company, began to sell their own version of this drill. New Railhead wasted no time defending their turf: the day after the patent issued, they sued Earth Tool for infringement. But sadly for New Railhead, Earth Tool persuaded the judge that the patent was invalid.

Inventors need fully-descriptive patent applications to protect their precious inventions, but few inventors can see their inventions with a stranger’s eye. The patent attorney’s independent perspective complements the inventor’s vision, and together they produce a more complete description of the inventive concept and its various ramifications. Don’t go it alone: you and your patent attorney are more valuable together than apart. Partner up from the outset, to ensure that your provisional application provides a rock-solid foundation to support the patent you are hoping for.